Hola amigos del Geco! If you are yet to book your Easter break please take a minute to consider our last minute special discount offers: Free accommodation for the youngest guest: We are offering free places for the youngest child in a family of four or five, meaning a discount of €15 a night, a saving of more than […]

El Geco Verde has been working with the UK´s leading ethical travel agency Responsible Travel for more than five years now. One of the reasons we like them is because they go the extra mile to bring us nice customers! Our businesses are a really good fit. They scour the globe to find genuine low-impact, […]

Our little hotel has been recognised as one of the best places in Europe to see the stars! El Geco Verde has received the Starlight Certification, awarded only to sites where conditions for night sky observation are considered highly favourable. The certification is awarded by experts at Fundacion Starlight, an international organisation which promotes astronomical observation […] 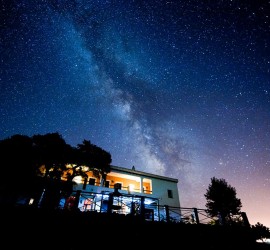 Our winter guests have been asking if it’s possible to combine a visit to El Geco Verde with a trip to the Pradollano Ski Resort in Granada. The short answer is yes, and we know because we just did it! A week ago we loaded up our little Panda, shoehorned in the kids and packed […]